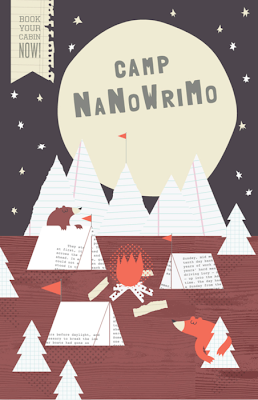 It's finally here!  Camp NaNoWriMo is the summer version of our yearly rough draft-fest.

July is the beta month (intrepid inaugural campers like me will be reporting bugs - not the Edward Cullen but the interwebz-ruining kind).

August will be fully functional.

You can follow my progress at: YellowTypingFiend, but I'll probably take 2 months to hit 50K.  Stupid computer strain.

Or send a care package (the Camp NaNoWriMo gear benefits the Office of Letters and Light, which runs NaNoWriMo and ScriptFrenzy.)

Anyone going to camp with me?  If there's anyone in SoCal who wants a writing buddy, I'm happy to organize a coffeeshop/Panera Bread gathering.
posted by Sophia Chang at 6:22 PM