A Day in the Life: Kelley Nicole from the Yardbirds


It's my fellow mezzo-soprano! Kelley performs in the Yardbirds with me and we actually lived in the same House at Harvard (house like Gryffindor.) She shares a Day Weekend in the Life touring the Bay Area with her show. 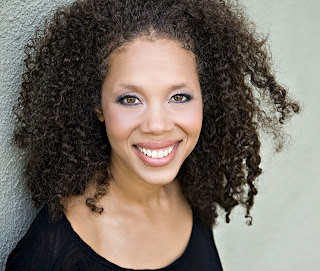 Citing the dynamic performing and songwriting influences of Alicia Keys, India.Arie, Stevie Wonder, Prince, Nikka Costa and Erykah Badu, just to name a few, you’ll find Kelley Nicole at the charming intersection of a spunky funky attitude and an alluring R&B acoustic vulnerability.  New Jersey born and Harvard educated, this singer/songwriter was formerly one of the lead vocalists for the critically-acclaimed Afro-funk band, Soulfège, (nominated for multiple Boston Music Awards, Independent Music Awards, and Boston Urban Music Awards, as well as a featured performer at the NACA National Convention).  She has performed around the world, from Europe to Africa and in venues and colleges across the United States, and has also been blessed to share the stage with such renowned artists as Bobby McFerrin and El Debarge.  In a vein similar to great front women before her, a la Lauryn Hill and Gwen Stefani, Kelley Nicole has come into her own, using her unique musical talent to impart lessons of love, empowerment, and divine transcendence over all circumstance as she learns them, one by one.  A passionate advocate for the arts in education, she is the Executive Director of Harvardwood, a global nonprofit organization of Harvard alumni & students working to strengthen ties among the arts, media, entertainment, and education.  She currently serves as one of the praise and worship leaders at Covenant Blessing Fellowship in Wilmington, CA and is repped by Wally’s World of Entertainment.  Learn more about Kelley Nicole at www.thekelleynicole.com.

A Day in the Life On The Road

The SHATTERED GLASS trip to Cal State Monterey Bay last week was nothing short of amazing.  I'll do my best to give you guys a taste of how it all went down, it was truly life changing. 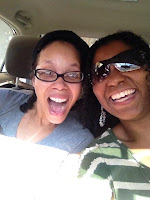 Shaunelle and I started off the adventure as all adventures should start off - with a ROAD TRIP!!!  (We were just a little excited as you can probably tell. ; )  I know, I know, two road trips in two months, what a life I lead eh?  The trip to Monterey was quite scenic.  I didn't realize how picturesque it would be until our awesome tax lady, Susan, told me how jealous she was that I was going to Monterey.  I soon found out it's a special place indeed.

We woke up on Thursday morning at the Travelodge, and this was the view from our window.  LOL, we're not fancy on this trip folks.  What's an adventure without the hospitality of your local motel?  But seriously the Travelodge was actually quaint, the people were friendly, and yes, they had free breakfast.  I don't need much more. 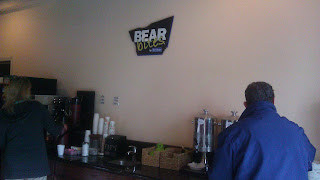 The first item on our agenda for the day was our workshop with select students at CSUMB.  Well, first and foremost, Shaunelle and I always get our prayer on.  Nothing is impossible with God, He shows up and shows out if you let Him!  We're but mere vessels for His work, so we must acknowledge Him first.

In the classroom, Shaunelle and I took the students through the SHATTERED GLASS workshop materials, empowering them to take charge of their lives and to let go of a victim mindset.  We gave them a taste of what to expect at the performance that evening, and took them through some really fun exercises where we danced, shouted, cheered, and in general had a jolly time.  The participants really seemed to enjoy it, and Shaunelle and I were in our element. 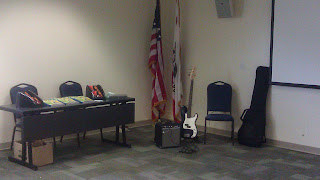 Did I mention there was food, highly important: 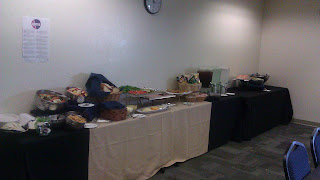 During the workshop, engaging with the students: 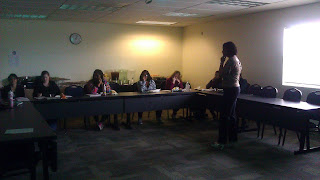 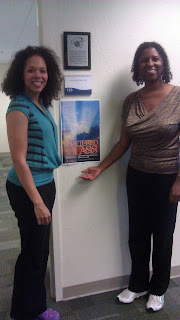 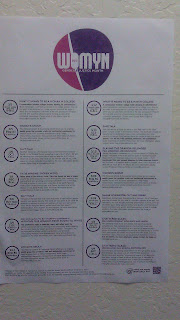 The SHATTERED GLASS workshop and performance series was honored to be a part of CSUMB's "Womyn, Gender, and Justice" month.  We were the last of a month-long series of programs on campus.

Our next stop, back to the motel to rest up for the evening's performance!

Honestly, I couldn't really rest all that much.  I was a little anxious!  This would be our first time in a black box theatre -- our very dream for SHATTERED GLASS coming true!  We could only get in as early as 5pm.  If it were up to me we would be there promptly after our workshop, making sure all was set up right.  But alas, probably better that we got a little bit of rest anyway and I had to remind myself that God is in control!

We arrived at the theater at 5pm sharp, where the team awaited us.  Our wonderful administrator, Rita (the woman who has been advocating for us since we first spoke to her about SHATTERED GLASS last summer) was there to greet us and to make sure we had all we needed.  We told Rita she was our angel from heaven.  She worked over time to make sure everything ran smoothly.  She introduced us to the team at the theater and we got right to work.  This would be the first time that I had support with the AV aspects of our show, so we had to do a dry run to make sure the team understood all of the cues and everything worked properly.

Here's Rita and one of our great crew members! 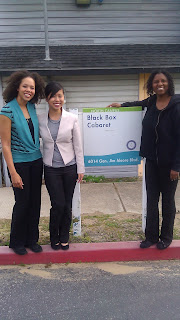 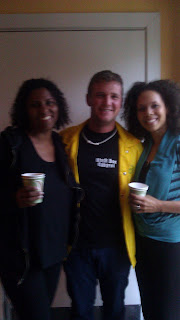 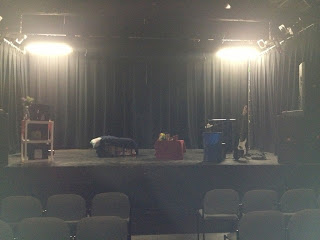 Did you guys see my tweet!?  I was so nervous about not having any mics in this brand new space for SHATTERED GLASS.  TWEET: Black Box Cabaret theatre, here we come!!! Pray for our projection y'all! :) Thanks @csumb team! @Shatteredglassshow 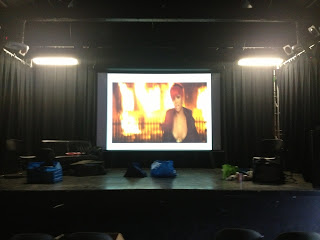 BIG UPS to the students that work at the Black Box Cabaret!!  They were professional, friendly, problem solvers, and best of all, they really got what SHATTERED GLASS was all about.  They were there for us every step of the way, and the performance was executed flawlessly!  Being on that stage was like stepping into an alternate dimension.  I forgot what it was like to lose yourself in the darkness of a theater, to fully step into a world and a character you've created, and to experience the unique yet dynamic contrast of feeling immersed in your world but at the same time knowing that you have the full attention of the audience -- that they have accepted your invitation into this other space.

Afterwards we were greeted with hugs, smiles, pictures, autograph requests, and more by the wonderful students that were in attendance.  From what the students told us, it seemed that the show really touched people, leaving them with images they'll never forget, and an understanding that if Shairi can rise, they can too, and that's what it's all about. 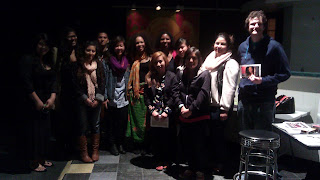 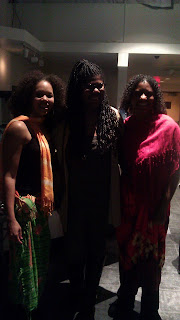 More of our awesome crew that night! 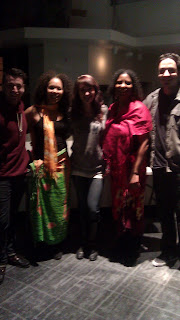 We went to bed that night feeling alive.  This is where we're meant to be, what we're meant to do.  Life doesn't get much better than that.  Couldn't stop tweeting about it.  TWEET:  Great, GREAT show at @csumb, tonight. We are humbled and honored by their graciousness and professionalism.

On Friday, April 5th we brought SHATTERED GLASS to a nearby women's shelter, in partnership with A Window Between Worlds, an organization for which we serve as artistic ambassadors.  We did not take pictures or video there, for obvious reasons, but the magic was just as palpable.  One comment that touched a nerve for us was one of the women explaining that these shelters can often feel like prisons because you're surrounded by the acute pain of its inhabitants.  The participants expressed true gratefulness for the air of love, joy, and hope that was swept in by our work that afternoon, and they hoped we would not only return, but were also eager to know if we would be visiting other shelters in the future.

Both shows truly deepened our understanding of the power of art to heal and change lives -- the core of the mission of SHATTERED GLASS.  TWEET: April 4th & 5th, days to remember. Very humbled and honored to serve today with God's gifts. #shatteredglassshow

posted by Sophia Chang at 6:18 PM No comments:

Email ThisBlogThis!Share to TwitterShare to FacebookShare to Pinterest
Labels: A Day in the Life, Yardbirds

Photo Update and Watch This Space...

...for a special Day in the Life coming next week by a fellow Yardbirds singer who shares a day on the road touring with her show!

As for me, in the last two months I've: