Blog about your Dog Monday!

Lindsay at Lindsay Writes started a new series. Show us your dog or other pet on Mondays. Include lots of photos, please.


This is Terry, my 2-year-old-ish shelter rescue.  After scouring the internet, I found ONE dog that looks kinda like him who's a Dachshund and Fox Terrier mix.  So we're going with that.

He's not a fan of water and won't go into the ocean, but he's completely obsessed with being around other dogs, whether they want him around or not.

And yes, sometimes I call him Jacob.
posted by Sophia Chang at 9:04 AM 9 comments:

A Barbie for the Ladies, with Poll

What is with all you Team Edward readers?

Perhaps my new doll will sway you:


Not convinced yet? Look at the back:

What Oprah's Book Editor Told Me


I’ve heard if you don’t publish by 30, you won’t make it...as someone who’s barely clinging to what’s left of my twenties, statements like these strike fear in my heart.

As someone who graduated from Harvard when I was 20, I once feared the best was in the past...but no longer.  Let me tell you why:

In 2009 I went to the Literary Writers Conference in NYC - my first conference.  The panel that inspired me the most was Anatomy of a First Novel with Eugenia Kim, who talked about her debut The Calligrapher's Daughter.

I came up to her afterward and told her what an inspiration she was to me as a debut author who is NOT 20 years old.

Sophia the Fangirl: Everyone I went to Harvard with is already published, and I'm almost 30.

And you know what happened?


Sara Nelson, the books editor for O Magazine and former editor-in-chief of Publishers Weekly, who had been moderating the panel, jumped in and said to me:


Ms. Nelson's quip was possibly the most encouraging thing I could hear at the beginning of my fiction career.  From that moment on, I didn't give one more thought to my classmates who took a different path than I.  They got MFAs and moved in with their parents/worked at their parents' companies until they made it.

I went to Hollywood with ZERO contacts and made a living as a film and TV actor - and hey, I had several plays and solo shows produced on both coasts.  So technically, I did work as a creative writer fresh out of college.

So pish posh to anyone who thinks us geezers have no chance. :)

I'll leave you with my favorite quote from Cindy Lauper on an episode of Celebrity Apprentice.  She said to a burgeoning country singer:

Nothing really happened for me until after 30.

Email ThisBlogThis!Share to TwitterShare to FacebookShare to Pinterest
Labels: best advice ever, conferences

I went to the doctor today with my 6-day sore throat and it's confirmed: I have strep or a similar infection.

Alas, I was just on a course of antibiotics before I left that inflamed my crackly joints (I have old people's knees and hips from a lifetime of dancing).

After the doctor's office, we stopped by the Borders in Pasadena, CA for its closing-down sale.  So sad!


Even sadder: I read on Kristin Cashore's blog that Bob Slate, the family-owned stationery store where I bought all my notebooks while I was at Harvard, is also closing down.  They've been in Harvard Square for 75 years and I used to pop in there for no reason just to browse and touch their gorgeous paper.

What is going on with the paper/book industry right now?

Hope you're all having a wonderful President's Day.
posted by Sophia Chang at 4:07 PM 7 comments:

After reviewing my Goodreads, I realized with surprise that most of the books I'm reading this year are paranormal/urban fantasy. My fourth challenge for 2011...

posted by Sophia Chang at 5:06 PM No comments:

Email ThisBlogThis!Share to TwitterShare to FacebookShare to Pinterest
Labels: reading

I'm a recent Kelley Armstrong devotee and I'm blazing through her Otherworld series as fast as my kindle can download them.  (I haven't been this taken by an urban fantasy/paranormal series since Sookie Stackhouse.)

I just finished Dime Store Magic (Book 3), in which I discovered my book crush of the month:

Why I love him:
Who are YOU crushing on this month?
posted by Sophia Chang at 8:24 AM 4 comments:

I'm Back With More Bugs

Of the viral kind now!

I managed to avoid catching my boyfriend and my student's colds before I left for my trip, only to be taken down by my uncle's in Taiwan.  At least the meds knocked me out for the plane ride home.  I didn't even get to finish watching Unstoppable, which is the world's best-shot, best-cast bad movie.

Here's a photo of the Taiwanese version of the Teletubbies I saw in a toy store:

Email ThisBlogThis!Share to TwitterShare to FacebookShare to Pinterest
Labels: Taiwan

At Least There Aren't Bug Bites All Over Your Face

Foreign guys bugs are into me.

In Tahiti I had 40 bites on my body at one time.

In China the bites blew up to silver dollar size.

This year, by going to Taiwan during the freezing cold rainy season, I thought, "At least there aren't any mosquitoes."


So last night I bunkered down on the floor bed of my aunt's unheated apartment (nothing like a Chinese bed to make you wake up with a numb butt).

Nothing was exposed except my face.

And this morning I woke up with 3 big bug bites on that face.

Mom this morning: Bugs are like dirty old men - they always go after the young ones.

***
p.s. I haz the internetz!  (Sorry, that's the last time I'll LOLcatz)
My second uncle loaned me and my mom his magic portable internet wand.
posted by Sophia Chang at 7:03 PM 5 comments:

I believe this is what you were talking about, Rosa?

A variety known as Black Pearl:

I coughed up the exorbitant fees for 24 hours of internet.  Tomorrow I move to my aunt's apartment, which might mean true radio silence.
posted by Sophia Chang at 6:10 AM 4 comments:

Pardon the absence...internet apparently costs $40 a day here.  sigh
posted by Sophia Chang at 12:33 AM 4 comments:

Comedian @KevinAvery interviewed 3 members of the LA Twilight Book Club for his new series on msn.com

Then Kevin donned fangs so we could reenact the pivotal "How old are you?" scene from Twilight.

After 3 ridiculous hours of Team Jacob v. Team Edward talk, our slot was cut into a 3-second snippet.  Catch me in the beginning holding tight to Edward like a spider monkey.  (Please tell me you know that reference.)  I even got to keep the sides!*

You can also watch it at msn.com here

Are You Your Books?

Natalie Whipple's blog post has spurred one of mine, again.  (Okay, I kind of stalk her.)

While discussing a writer's fears even when sending book drafts to an already-procured agent, she said

We are not our books, right? Kind of?

The thing is, I am.  Or rather, my books are my inside put outside.

But the good thing about that is, even if the book doesn't see the light of day, it remains a marker to a period of my life.  When I hear a song I listened to while writing it, I can instantly see the desk I sat at; I know exactly the yearning in my heart that made that particular book breathe its first life.

Books-as-hearts are also a timeline of you as a writer.  With just a flick, you can unfurl the drafts that came before, each one a pencil line on the door jam notching your writerly growth.  The characters will still smile at you; they will not forget you.

Your books, shelved or out for query, published or rough, will hold this for you.  They will hold all of this.  And you'll love them for it.
posted by Sophia Chang at 3:23 AM 2 comments:

1. We are on this earth because we are capable of great love.

3. One of the hardest things for me to learn is how to let go.  I still don't know how.  I just wait until it leaves my being on its own accord, atom at a time.

4. The secret and unsecret yearnings of man are the same: to feel connected.

5. I remember every detail, unfortunately.

6. That a new day begins is one of the best parts of my life.

7. And as for the weekend, tonight I'm looking forward to a eucalyptus-flavored epsom salt bath, tomorrow my plans include working and singing and a former student's birthday party and Sunday, I want to bring back lots of yummy food from the Harvard interviewer's luncheon.
posted by Sophia Chang at 8:34 PM 4 comments:

The 48-Hour Dark Experiment was just what I needed to cut the umbilical cord between me and Mother Internet.

While I was offline I:
And at 1 a.m. last night when the boyfriend got home from work, he presented me with a fast-breaking/early Valentine's gift: 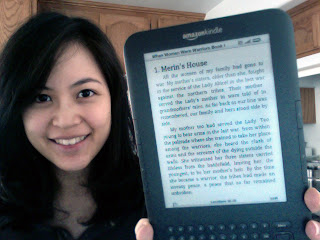 Displayed is the first book I bought: The Warrior's Path (When Women Were Warriors #1). Fitting, because the first novel I ever attempted started as a short story in college about female warriors.

I had decided that the Kindle wasn't worth it, but he'd already bought one for me, aw.  I'm sure I'll LOVE it once I get on the plane next week without 5 hardcovers.  I'll also be bringing pages from my critique partners, so send 'em on over, ladies!

The first social network site I visited with my Kindle?  Twitter.

How did your Dark Outs go?  And to those who are just starting theirs - you can do it!
posted by Sophia Chang at 4:59 PM 5 comments:

You can't make me, but you can sure join me!

I want to unplug for a little while too! If you do, I'll do it with you.

Here are my highly (un)official rules:

Please feel free to join in by commenting below and then promptly turning off the internet.  If you want to blog about your experience when you return, let me know and I'll link to you when I come back.

Here's to laughing in the face of internet!
posted by Sophia Chang at 10:23 PM 3 comments: